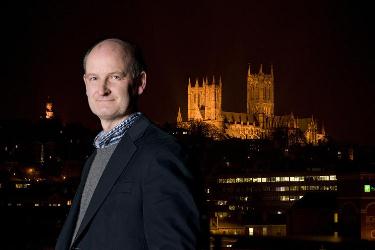 David is Associate Professor of Media at the University of Lincoln and Dean of Faculty Media, Humanities & Performance-  and the University’s first Dean of Public Engagement. He has been with the University for 12 years and has helped establish nationally-regarded Schools of Media & Journalism. Industry validation for programmes within the faculty has flowed from: NCTJ, EJTC, JAMES & the PTC. In 2007, he helped secure for Siren FM the first Ofcom 5-year Community Radio licence to be awarded to a university in England, renewed in 2012. Siren now sells content to a European community radio network with an audience of millions. The University of Lincoln became an “honorary” M62-corridor university within the BBC Partnership scheme, bringing advanced opportunities to graduates joining the BBC and other independent media organisations at Salford Quays. David also has special interest in the development of the micro-scale Creative Industry outside metropolitan centres.

In the 1980’s & 90’s David worked for the BBC in London as a Film & Dubbing Editor. He was Supervising Dubbing Editor in 1991 for the Oscar-winning film Enchanted April. For the last five years at the BBC he was Lead Editor and Post-Production Manager for BBC Science post-producing the weekly magazine show Tomorrow’s World and other long-form documentaries. He specialised in, and innovated, a process for the efficient multiple-versioning of UK programmes for worldwide distribution via the Beyond Corporation, WGBH Boston and Discovery Channel.

He is passionate about the contribution universities can make to help society better understand the importance of Higher Education in the Humanities and the Arts, as being of great social value to all.